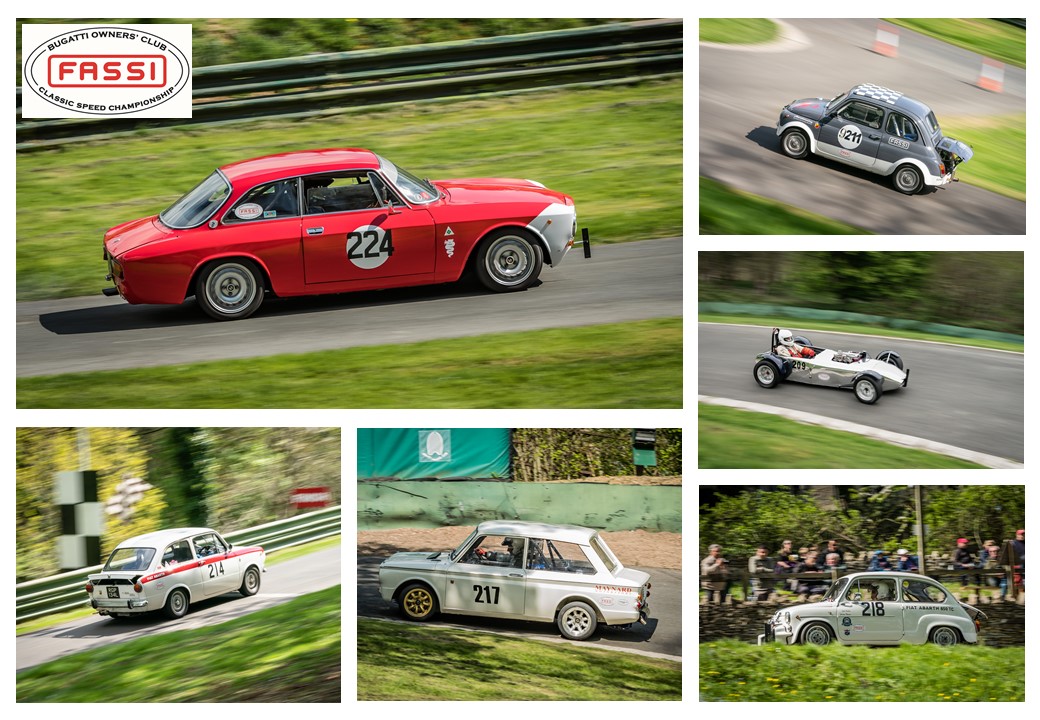 Round 2 of the Bugatti Owners Club / FASSI Classic Speed Championship took place at at the club’s home venue of Prescott Hillclimb on the 24th April.

There were 25 entrants across the three classes & the Italians were well represented with three Fiat Abarths & two Alfa Romeos. A big crowd turned out which was great to see after two years of Covid restrictions & certainly added some atmosphere to the day.

The most numerous class was once again Classic Saloon cars with a healthy field with great variety. The handicap win was taken by a returning Mark Maynard in his spectacularly driven Hillman Imp. Sideways everywhere, Mark finished 1.6 seconds under his previous best with a now properly sorted engine aiding the powerslides! Second on handicap was Peter Hall in the Fiat Abarth OT 850. Brian Ashley was third in the A35 , already looking like a solid contender across the season if he can keep up this early scoring rate. Fastest saloon car went to the Escort of Simon Braithwaite, not quite matching his second practice but still under the 50 second barrier.

Leigh Carter & Dave Fripp driving the FASSI Fiat Abarth 695 SS had a good day getting to within 0.11 & 0.25 seconds of their handicap times respectively for a 5th & 6th place finish.

​Sportscars was won on handicap by Charles Boulton in the MGB V8. Stephen Akers was second in his Lotus Elan from a returning Doug Chipperfield in the rapid orange MG Midget – Doug also claiming fastest time in the sportscar class.

Single seaters and sport racing cars was won on handicap by Jeremy Rivers-Fletcher in the Triumph special, second was Christopher Wigdor in his Ukrainian Humanitarian Appeal liveried Mallock , third was Local ace Martin Jones in the lovely Elva Mk7 twincam. Fastest in the class by a long way was Peter Thurston in the other early Mallock , storming to a fastest time across the whole classic entry by a comfortable margin.

Many thanks to Stuart Wing www.captureyourcarphotography.com & Steve Shelley www.ssshootphotography.co.uk for some great photographs.