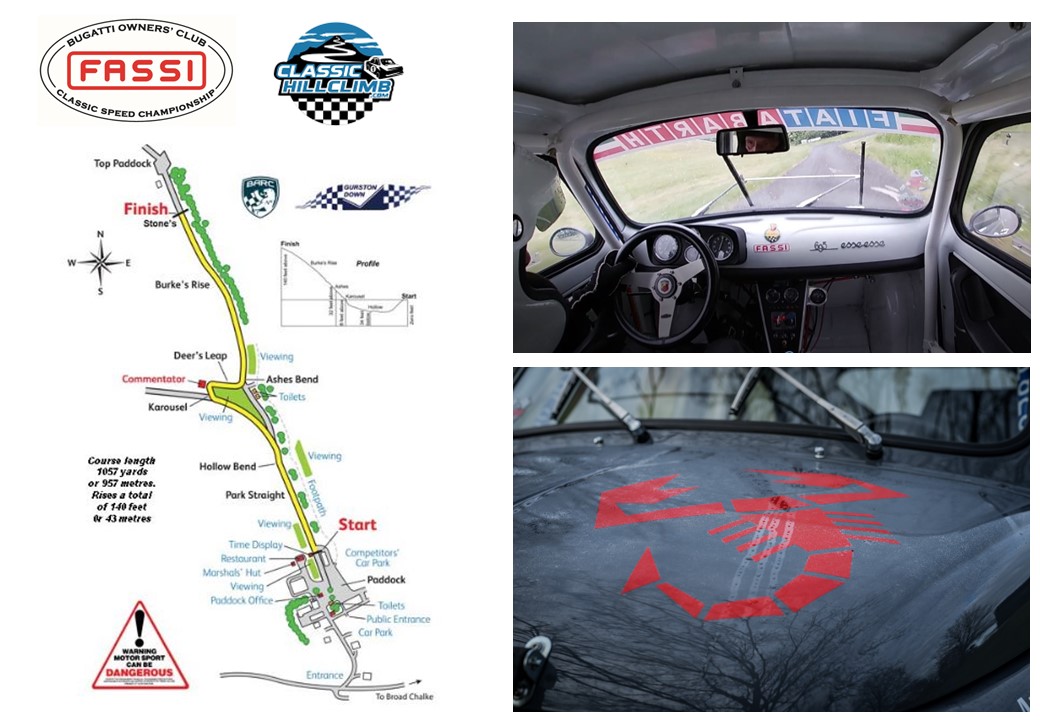 A reduced field of eight competitors made the journey to Salisbury but were rewarded with a warm welcome & a fantastic high speed course to enjoy.

The 967 metre course starts down-hill, dropping down to Hollow, where the fastest cars doing around 120+ mph, round a sweeping left hander of Little Hollow and Hollow Bend, braking very hard in to the sharp and steep uphill section of Karousel. Speeds though Karousel are down to 25 mph. After the second right hand part of Karousel there is a short straight with a bump, Deer Leep where cars can get a little air, before the hard left hand corner of Ashes.. After Ashes, it’s up-hill again to the finish for a total rise of 43 metres.

The course record produced an average speed of just over 85 mph and the fastest recorded speed over the finish is 159 mph.

The FASSI sponsored Fiat Abarth 695 SS of Leigh Carter & Dave Fripp was quickly into top gear as it flew down the hill reaching the heady heights of 70mph which, in the tiny Fiat, is plenty fast.

The first timed sessions saw Leigh Carter sneak a dry run just before the rain started & getting within a second of his handicap time. He was followed by Mark Hobbs in his Escort who spun off at Karousel on a now greasy surface. The remaining competitors were driving more cautiously through light rain which took time off everyone gifting Leigh Carter a class win, with Dave Fripp in second.

Sadly the afternoon session was cut short when a competitor was taken seriously ill on the hill leading to the event finishing after the first timed runs.

Many thanks to the volunteer Marshalls & all the team at Gurston Down for a very well run event under what turned out to be difficult circumstances.