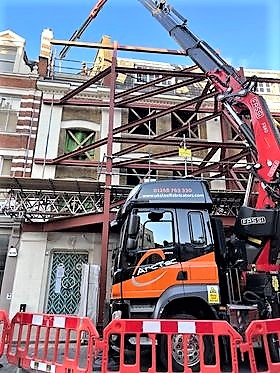 A recent job saw them working in partnership with KCP demolition to erect a steel structure to preserve the original façade of a building on Marylebone Lane in Central London. Working in such a busy part of London certainly presented its challenges. There were limitations on the number of vehicles allowed through during the closure of the narrow road; little space to deploy the crane’s outriggers coupled with noise and safety considerations for residents and passers by.

The company used its FASSI F660RA and long reach flyjib to its full potential with little margin for error to ensure the steel structure was erected safely protecting the building’s façade. The skills of the operator combined with the reach and the millimetre precision of the FASSI crane allowed for the steel beams to be lifted into place with no margin for error. Beams were carefully passed through windows and to the roof of the building enabling the demolition to be carried out behind from the top down.

Thanks to Dean Stiller for sharing this #fassiatwork story and photos. As Dean says ‘Everything is made easier with the FASSI.’